American Standard is a name that you see around the world, not just in the States. It was founded in New Jersey over a century ago. It’s primarily known as a producer of toilets – that’s where you most commonly see its familiar American Standard signature logo, but the company actually has three divisions. These are bathroom faucets, bathroom fixtures and Chinaware. Within one of these ranges, the company also produces garbage disposal units too. Their products tend to fit into the mid-range while not being either inferior by being too cheap or being super luxurious either. As such, their products tend to aim at no frills, value for money, which perfectly suits the garbage disposal market.

While American Standards wash basins and toilets see wide distribution in large retail stores, their other consumer-led appliance products are well-respected; just seen in stores less often. Don’t let this put you off. They’re a trusted brand with something to protect with their enviable reputation, so they aim at the middle market to offer good value and high production values to boot. Here are two products that offer something to consumers looking for a new garbage disposal for their home.

The American Standard ASD-1250 model is known as their Torque Master which is great marketing speak. However, the clever marketing notwithstanding, there’s a lot on offer here. The 1 ¼ horsepower motor is not to be taken lightly. There’s enough power there to make short work of any food or miscellaneous garbage at this rate. However, what’s even more impressive is the 2,800 RPMs that the engine is capable of powering. It’s therefore extremely powerful to slice through tough produce with total ease and turn it into something so fine, it will never likely block up the outside drain. 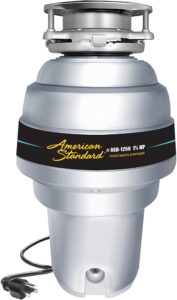 To keep the noise level down, the unit is fitted with a sound shell to provide much needed insulation from all that high RPM activity. The grinding system is purposely balanced to minimize vibrations and other sound emanations too. The special Silver Guard is a magnet that is intended to secure metallic objects to the side before they get inside the unit itself. This avoids a strange fork or knife finding its way down the chute. A Bio Shield is also fitted too. This intends to prevent contaminants and unwanted related odors from escaping the unit once food waste has gone down there. It’s a nice added touch that you don’t always see in lesser brands or more basic models. A power cord is pre-installed which is helpful on the installation side too.

The American Standard High Torque model also comes with a one ¼ horsepower engine behind it, so it won’t let you down. There’s a fractionally slower 2,700 RPMs to slice through garbage as needed. The package includes all the relevant parts including a stopper to prevent items falling down too. It’s powered with a cord ready to go too. It will install underneath a stainless-steel sink where the rubber gasket is necessary, however with other types of sinks, it’ll be necessary to use some putty to create the right seal.

There’s a magnetic guard ring present which tries to grab cutlery before it slides into the machinery and causes a jam. This can be a real lifesaver and prevents one mistake breaking your internal cutting parts. To reduce noise, the shell is insulated but the turntable is also balanced to prevent vibrations too. It won’t be silent, that’s for sure, but it’s as quiet as a 1+ horsepower with a maxed-out RPMs can get you under the sink! Rust also won’t be an issue because the impellers and cutting ring are made from stainless steel. They also shouldn’t break unless you really treat this disposal without due care. The grounded power cord is installed ready to go. This makes installation easier than it might have been otherwise.

Garbage disposals are designed to both grind through food waste and reduce it to something that will get through the drainage system (exterior to the property) without issues. As food waste moves through the unit, the cutting parts rotate ridiculously fast slicing through what’s ever in its path. It’s really quite impressive! What separates these American Standard models to lesser ½ or 1/3 horsepower ones is that these two reviewed units have a far greater engine power and RPMs of 2,700 or greater. These two factors combined means that the sheer power and speed of the stainless-steel grind and slice process is formidable.

As a result of the extra power and RPMs, it’s far less likely that the American Standards unit will get jammed up either. This is because even tougher produce like root vegetables are typically no match for laser sharpened cutting parts moving at over 2,000 RPMs! Indeed, the manufacturer knows this, which is why they’ve referred to the torque in the branding of both their products under review. It’s a major selling point in the performance each unit will deliver. The balanced cutting to reduce vibrations and the casing that acts to dampen volatility further also ensures the noise is reduced as much as possible with a powerful garbage disposal unit. Ultimately, there’s a lot of work going on inside, so some noise is inevitable, but their products are designed to mitigate that.

Whilst American Standard isn’t new at all as a brand, it’s not as well-known with its garbage disposal units. Certainly, that’s likely to change when they offer powerful products such as this which are easy to install and can slice through virtually anything that is fed down their continuous feed units. Now, whether you require something as powerful is a matter for discussion, but for anyone who’s already owned a garbage disposal that was less powerful, upgrading to 1+ horsepower unit is the next logical step. And most people who do are glad that they made the leap. Choosing the right brand and model is the next most important decision. Hopefully, we’ve helped you in this regard now too.